Our paper about the study of the evolution of Stackage, a curated repository for the Haskell language, has been accepted in the Proceedings of the 37th Annual ACM Symposium on Applied Computing.

Evolution of a Haskell Repository and its Use of Monads: An Exploratory Study of Stackage

Package repositories for a programming language are increasingly common. A repository can keep a register of the evolution of its packages. In the programming language Haskell, with its defining characteristic monads, we can find the Stackage repository, which is a curated repository for stable Haskell packages in the Hackage repository. Despite the widespread use of Stackage in its industrial target, we are not aware of much empirical research about how this repository has evolved, including the use of monads. This paper presents an empirical study that covers the evolution of fourteen Long-Term Support (LTS) releases (period 2014 – 2020) of available packages (12.46 gigabytes), including the use of monads from the mtl package that provides the standard monad core (e.g., state, reader, continuations). To the best of our knowledge, this is the first large-scale analysis of the evolution of the Stackage repository with regard to packages used and monads. Our findings show, for example, a growing trend of packages is depending on other packages whose versions are not available in a particular release of Stackage; opening a potential stability issue. Like previous studies, these results may evidence how developers use Haskell and give guidelines to Stackage maintainers. 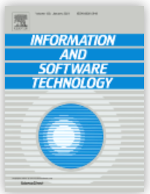 Professor Paul Leger becomes a Guest Editor on the journal Information and Software Technology, which is a specialized software engineering journal in Elsevier (WoS-q2/SJR-q1).
This special issue is “Visualization applied to Software Engineering” and you can find more information on https://www.journals.elsevier.com/information-and-software-technology